The nasty and brutal punishment (1000 lashes) being meted out to Saudi blogger Raif Badawi is rightly being condemned by human rights groups across the world.

What may not be so well-known  is that the British government is currently negotiating to sell prison expertise to the  repressive Saudi judicial regime to make money in order to cut the deficit for the taxpayer.

The man championing this move is none other than Chris Grayling, the justice secretary, well-known for wanting to deny prisoners books and an enthusiastic backer of longer prison sentences and tough prison regimes.

Quietly he has set up a commercial arm of the Ministry of Justice called Just Solutions International. You can download a glossy brochure here.

Mr Grayling is passionate about this. At the launch of the social enterprise he said:

“We are leading the world in our management of offenders and the reforms we are introducing will push us even further ahead of the pack. I’m proud that countries look to us when they want to improve and develop their own systems.”

“This social enterprise will build on our global reputation for innovation while getting best value, as any profits made will be put directly back into improving our own justice system, making it a win-win for hardworking taxpayers.”

What we didn’t know then was where Britain was selling this expertise. However just before Christmas the Ministry of Justice released an interim report on its progress.

It revealed as I report in Tribune :

” JSi submitted a £5.9 million proposal to the Kingdom of Saudi Arabia, Ministry of Finance to conduct a training needs analysis across all the learning and development programmes within the Saudi Arabian Prison Service.

Also in August, JSi submitted a large-scale bid to the Royal Oman Police (ROP) proposing assistance for the design of a new prison. Discussions are currently taking place with ROP about further learning and development training programmes.”

The document states that Chris Grayling visited Saudi Arabia last September to sign a memorandum of understanding on judicial co-operation with the regime and promote British legal services and Doha in Qatar to promote co-operation. A junior justice minister, Lord Faulks, visited Kazakhstan and Kyrgyzstan during October, both also seen to be repressive regimes, and signed a memorandum of understanding on judicial co-operation in Kazakhstan.”

Really! Some people might think the Saudis will be taking comfort from such British support and personal visits from Chris Grayling while continuing these barbaric acts. Also is there not an ethical matter whether the British taxpayer wants the deficit reduced by making profits from a regime that tortures,  publicly beheads ( some 59 in first nine months of last year) and flogs people? It could be said to amount to blood money.

Frankly it suggests that Mr Grayling’s main aim is making money and he couldn’t care about the regimes who pay us and how they treat their own citizens. It also hypocritical. we are condemning ISIS for the same practices. Would Mr Grayling – if ISIS win – be happy to flog them the same British help for running their justice system in the Islamic state?

Also just how wonderful is the British prison system that we are selling. If you look at reports from the Howard League for Penal Reform we have huge problems with overcrowding, suicides and a repressive attitude by Grayling himself. Do we want to export that?

I am wondering how ridiculous the blogger Raif will think it is that the  system that incarcerates and flogs him benefits from British expertise to make money. I also wonder whether Mr Grayling – a  cold hard right Tory – was or is  a supporter of hanging and flogging himself.

Since this blog was published The Justice Secretary, Chris Grayling, defended to the BBC the sale of British prisons expertise to Saudi Arabia.

Speaking to Andrew Neil one the Sunday Politics Mr Grayling said: “It is right and proper that we as a nation try to work with other nations to improve their systems.”

Saudi Arabia has been widely criticised, including by the British Government, for sentencing the blogger Raif Badawi to 1,000 lashes and 10 years in jail.  Mr Grayling said he “completely condemns” the punishment.

He added: “This is something I am looking at very carefully.” 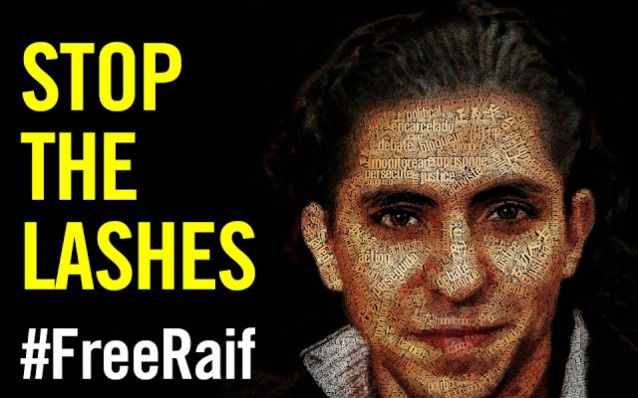 12 thoughts on “Ministry of Justice:Flogging prison expertise to Saudi beheaders and floggers”