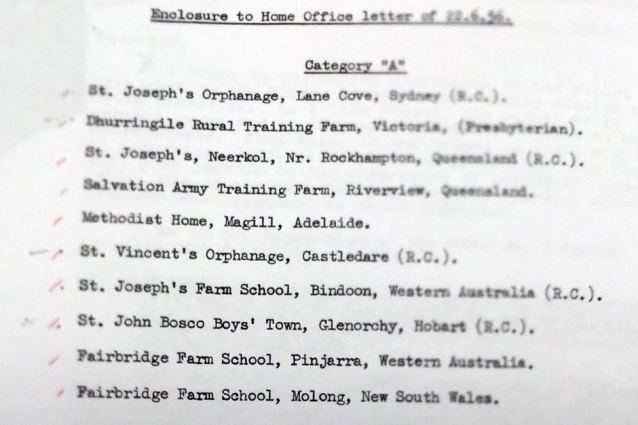 The list of homes the Home Office is said to have known abused children; Photo credit: ABC News

Next month the Independent Inquiry into Child Sexual Abuse will hold a hearing into how British children were shipped abroad to  Australia, Canada and Southern Rhodesia ( now Zimbabwe) where they were subject to appalling physical and sexual abuse.

One of the people who has submitted evidence to the British inquiry has already raised issues about his treatment at one of these homes, Fairbridge Farm School,New South Wales in Australia.

David Hill  was interviewed by  the Guardian last year in Australia and tells a horrific story of a place where people were poorly educated and fed,brutally treated and some sexually abused. He went out with his brother in 1959 from Eastbourne in Sussex.

He has been one of the people who eventually prospered becoming chairman and managing director of the Australian Broadcasting Corporation. ABC carried a report on his decision to send evidence here.

But his most damaging evidence is that he might not have gone there if the Home Office had acted on information they  received three years earlier after a visit of UK MPs to Australia. In 1956 they came on a fact finding mission to find out about conditions in those schools.

The result, according to evidence submitted to the inquiry. is that the Home Office were given the names ( see above in a memo) of ten schools that should have been put on a blacklist and no British children should have been sent there.

But the Home Office appeared to  do nothing even though they decided that  the schools would need a ”  complete metamorphosis ” to be fit to accept children. So they appear to have ignored the findings so they could keep the migrant programme going – where British children from poor backgrounds were offered a new chance in life. Their decision was no better than when a whistleblower, Lucy Cole Hamilton, alerted the Home Office over a decade earlier about conditions at Fairbridge Farm and warned them not to send British children there. As a report by Sanchia Berg for the Today programme revealed in 2009 the decision was to “lay by ” and do nothing.

I am hoping that this callous attitude – which seems extended today by the Home Office and Theresa May’s view that we should all but ignore the plight of immigrant children seeking asylum in the UK – is thoroughly examined by the inquiry.

The inquiry’s own research report points out the whole area is remarkably under investigated.As it states no inquiry has ever undertaken a proper  and sustained  analysis of the failings of this huge programme and properly investigated whether some of the children were sexually abused by people in institutions before they were sent abroad.

Gordon Brown has apologised in 2009 about the way the children were treated. But it was enormous programme – some 150,000 children participated and it began in the early 17C when children were sent to Virginia – though some of the largest programmes were after the second world war. It did not stop until the 1970s.

A lot of questions need to be answered – not least from the one posed by David Hill about the role of the Home Office in the late 1950s.