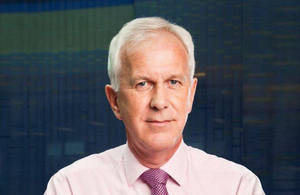 UPDATE JANUARY 11: Sir Philip resigned as chair of the environment agency today and will leave at the end of January. He will now have time to concentrate on his other directorships, play more golf and tennis, and spend more time in Barbados.

His resignation statement said: “I want to be clear that I have not made any untrue or misleading statements, apart from approving the statement about my location over Christmas that in hindsight could have been clearer.”

He also attacked the media for pursuing him but as Liberal Democrat leader Tim Farron said:“Many staff gave up their Christmas Eve, Christmas Day and New Year’s Eve. Their boss should have joined them. It seemed to many that this organisation was bereft of its formal leadership when it was most needed.”

So  Sir Philip Dilley, David Cameron’s appointment to replace Lord Smith as chair of the Environment Agency, couldn’t tear himself away from sunny Barbados to turn up to see first hand the failure of his agency to cope with Storm Desmond and Frank.

Today the man who attacked former Labour Cabinet minister Chris Smith for not turning up soon enough to see the disastrous floods on the Somerset levels is rightly being pilloried in the press for deciding to spend time with his family than see any of those unfortunate flood victims.

What was disingenuous as the Telegraph reported is that his press office hid the fact that home – at the age of 60 – is a luxury villa in Barbados and not in the UK. He has a flat in Marylebone, London.

He of course says “Everyone be everywhere all the time ” but then that is not surprising given the man has ten directorships, including his own company to run, as well as posts on the board of the Department for Environment, Food and Rural Affairs and Imperial College, London.

And the money – £100,000 a year for a three day week – is of course chicken feed compared to the sums of money he was getting at his last big job as executive chairman of the Arup Group Ltd – the £1 billion international civil engineering business – says he and his fellow 12 directors shared £5.75 million between. the highest paid director – presumably Sir Philip – got a magnificent £864,000 a year – including a very useful sum paid into his pension – which at the age of 60 he can start drawing down.

His Who’s Who entry declares his married his wife, June. late in 2003 and has three sons, and spends time playing golf and tennis in sunny Barbados. He also is a wine buff and opera lover.

To give him credit the Portsmouth born man  made his way up in Arup from a graduate engineer to chairman.

He is also one of David Cameron’s favourite businessman sitting on the Prime Minister’s Advisory Group from 2011 to 2013. He accompanied the Prime Minister on trade missions to India, China and Russia and was a guest at a state banquet given by The Queen for the Indian President.

So perhaps it is not surprising that he can’t devote too much time to this nuisance issue of flooding -but the salary must be a very useful sum to supplement his pension.