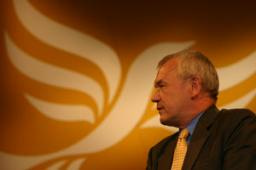 Sir David Williams, former lb dem leader of Richmond Council – pic courtesy: richmond.gov.uk
The Met Police’s official acknowledgement to Channel Four’s Dispatches programme that Cyril Smith visited the notorious Elm House guest house in Barnes in south-west London – which is alleged to be used by paedophiles raises serious questions for the Liberal Democrats.
So far attention has been centred on former Liberal leaders, David Steel. Nick Clegg and Sir Menzies Campbell,the latter who was shown (possibly unfairly) to be heaping praise on Cyril Smith at his funeral.
But the real Liberal Democrats who should be quizzed are Baroness Tonge, Lord Razzall and Sir David Williams on the scandalous affair that allowed Cyril Smith to sexually assault young boys.
They were the Liberal members of Richmond Council in the aftermath of highly publicised police raid on Elm Guest House and responsible – along with the previous Tory administration – for the safe keeping of children in the council’s Grafton Close children’s home.
Sir David is so much in denial that he believes that the current prosecutions by the Met Police of a senior member of council staff are only being undertaken to please the press.
Lord Razzall, who later moved a motion to sack Louis Minster, director of social services, who was in charge of Richmond’s social services at the time of the alleged abuse, told me at the time – that he couldn’t remember why he moved the motion.
However for the record he says emphatically:” I had no knowledge of the raid you refer to which in any event predated our taking control of the Richmond Council and I had never been a member of the relevant committee or a reader of the News of the World.”
“I did remember that the Chair of Social Services had lost confidence in the Director as often happened on a change of political control of a local council. You did not raise with my any issue of child abuse and indeed had you done so I would have told you that the Directors’ retirement had nothing to do with the events you referred to in your blog. Indeed had you raised them with me it would have been the first time I was aware of them.”
“In the current climate there can hardly be a more serious libel than to allege that I may have covered up Cyril Smith’s visits to Elm Guest House so that he could go on to abuse others.
“For the record, I only became aware of the allegations about Cyril Smith in 2013, fifteen years after I ceased to be a Richmond Councillor.”

And Jenny Tonge, then chair of the social services committee, who was informed of the scandal, and under her watch there were fresh attempts to raise the scandal,is refusing to say anything – even before people were arrested and charged.
Obviously all three can at the moment shelter behind the sub judice rules but when the trial is over next summer – they should be pursued to provide an explanation. At last Tim Razzall has made his views clear now.
But one must at least ask – did they know about Cyril Smith’s visits to Elm Guest House?-