Next April NHS England plans to take away money from some of the most deprived parts of the country and give it to areas that are the most affluent.
An arcane formula that decides how much your local NHS clinical commissioning body has to spend on you is expected to be changed by removing a weighting that automatically gives a bit of extra cash to areas of social deprivation. It will also mean that less money will go to areas where people die younger and more to areas where people live longer.
I am indebted to research by the Royal College of Nursing who have recalculated the effect of the change and I have already written about it for Tribune Magazine.
The political implications of this change- just over a year before the next general election are enormous. While NHS England is obviously not a branch of Conservative Central Office, its decisions will be remarkably helpful to the coalition government.
Without spending an extra penny it will appear that there is more spending on the NHS in many Conservative and Liberal Democrat marginals by election day and far less spending in many Labour strongholds where there is more social deprivation.
As the table illustrates the changes at the top and bottom are going to be dramatic. 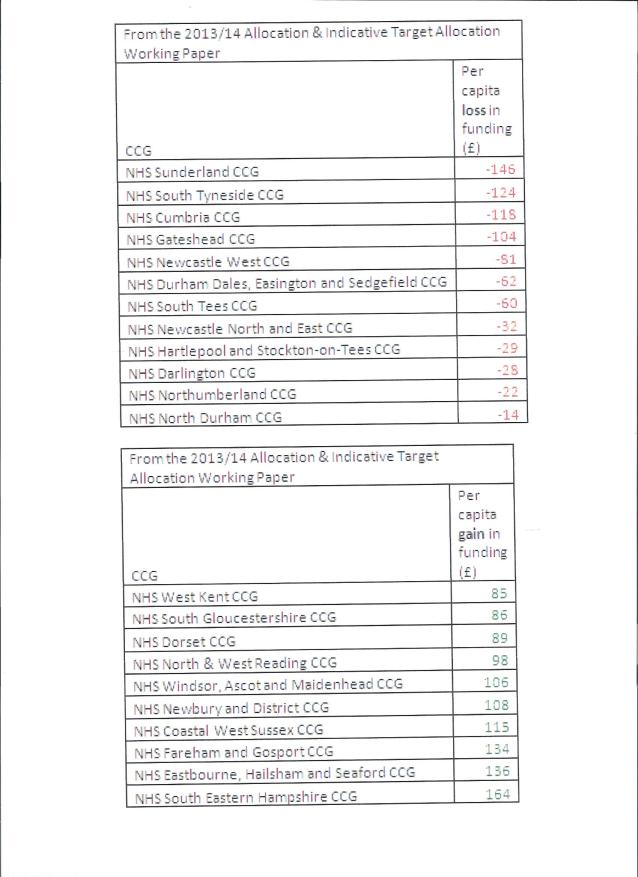 Translate this into Westminster politics this means extra help for Tory and Liberal Democrat seats in the south. Gainers include Tory strongholds in Royal Windsor, Ascot and Maidenhead – the latter the seat held by Theresa May, the home secretary; South East Hampshire, Eastbourne, Hailsham and Seaford ( Liberal Democrat seats); the West Sussex coast, Gosport and Fareham and Newbury.
Most useful is Reading North and West, which includes a Tory marginal, and has an extra £98 per person to spend; Dorset (£89) which is both a Liberal Democrat and Tory area, and South Gloucestershire, part of the Cotswolds, which gains £86.
While the losers with the exception of Carlisle ( a Labour Tory marginal with a 853 Tory majority) are all Labour.Worst affected will be Sunderland which will lose health care spending worth £146 per person. Nearly equally badly affected will be South Tyneside, Newcastle West and Gateshead.
Also if you take the latest Office of National Statistics life expectancy figures you will live much longer in Dorset than in Blackpool.
In 2009–11, male life expectancy at birth was highest in East Dorset (83.0 years); 9.2 years
higher than in Blackpool, which had the lowest figure (73.8 years).
• For females, life expectancy at birth was also highest in East Dorset at 86.4 years and lowest in
Manchester where females could expect to live for 79.3 years.
• According to 2009–11 mortality rates, approximately 91% of baby boys and 94% of girls in East
Dorset at birth will reach their 65th birthday. The comparable figures were 77% and 86% in
Blackpool and Manchester respectively.
No wonder the RCN is furious. As Glenn Turp, regional director for the RCN Northern region says: “The North East and Cumbria suffers from some of the worst health inequalities in the country. NHS England should be aiming to reduce inequalities in health outcomes, not make them worse.
“Given the size of health inequalities in this region, I believe that NHS England should actually be increasing funds to the areas with the worst outcomes. However, NHS England’s own data shows these proposals will do the opposite.”
Of course this figures are not yet in stone. But taken together with welfare cuts, big drops in the standard of living for the majority,and slashing support for the disabled – NHS England is merely helping the wealthy and rich in Windsor, Maidenhead and Hampshire villages get better NHS services all paid by the taxpayer at the expense of a Sunderland council tenant. All helping the coalition win the next general election.

7 thoughts on “The next NHS scandal: Taking cash from the deprived and handing it to the affluent”