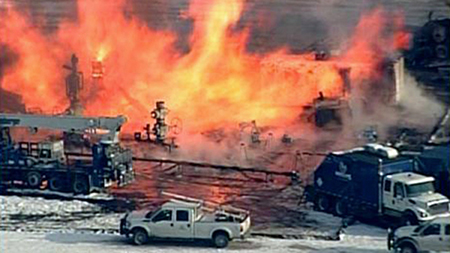 A warning to Britain  about the dangers of slip shod fracking  operations is revealed today in an extra ordinary story published on the TUC’s Touchstone blog.

It discloses how  a near disaster hit one hundred residents of a tiny Pennsylvania town where a fracking well exploded lnto a spectacular and deadly tower of flame, killing one person and burning for five days,

A missing worker (believed to be a contractor) from the Chevron Appalachia site has not been found and is presumed dead. Only a few charred human bones were recovered.The well pad has three natural gas wells. Nineteen workers were on the well pad during the explosion, a spokesman said.

Wild Well Control, an organization trained specifically to deal with natural gas explosions, was called to the site. Investigators finally gained access  to inspect the well pad for the missing employee eight days after the blast when they were able to pull a charred crane off the well pad that was nearest to the still-leaking wells. The wells should finally be capped after a  fires suppressant system was installed.

Chevron’s response to the disaster which terrified people living in Bobtown was believe or not to offer a free pizza voucher and  a bottle of soda. Yes this is true, I am not joking.

“Chevron recognizes the effect this has had on the community. We are committed to taking action to safeguard our neighbors, our employees, our contractors and the environment.”

I don’t what crass overpaid public relations firm advised them to do this but it is  the equivalent of saying to the local yokels let them eat cake. Given the gravity of the situation it is demeaning and insulting. I wonder if the dead man’s family will get a life supply of pizzas and sodas.

More worrying Chevron – which also facing protests about fracking in Romania  where it is riding roughshod over protestors  – is an active player in the UK.

To be fair it has a good record in the North Sea oil industry with interests in 10 oil and gas fields – and an excellent safety record according to its own website. But if it starts cashing in on the fracking boom – given the Coalition’s view that workplace safety is mainly just red tape – I for one would not like them in the vicinity. Still  it might be boon for pizza delivery drivers – it gives a whole new meaning to the warning to beware of pizza vans.

One thought on “Fracking by Chevron: Sorry we blew up your village, have a free pizza on us”