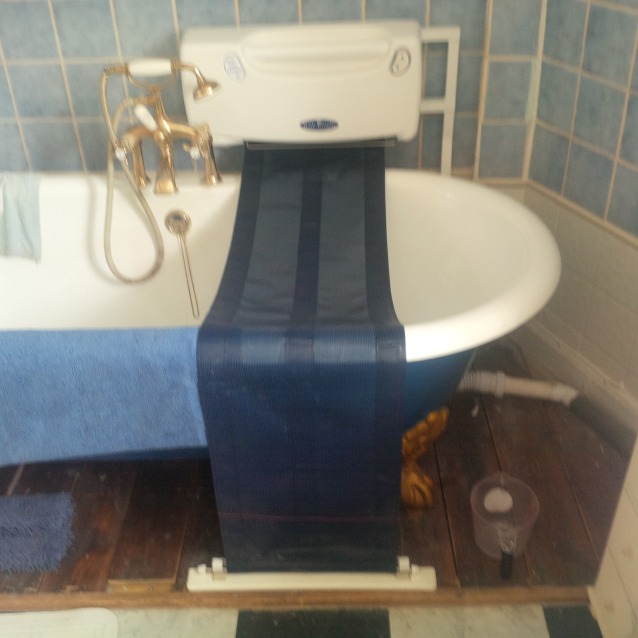 The Bath-Knight over my bath :Now working properly after quite a lot of trauma.

One of the disadvantages for my wife Margaret recovering at home from a stroke is that she cannot have a bath because of loss of mobility.

We have an old-fashioned roll top bath and our home is part of Grade II listed Tudor coaching inn – still a pub until 1969. Standard aids to get in and out of the bath don’t work.

So it was with great interest when we received a cold call – I’d still like to know who gave the company our  ex directory number – from a firm called Care Knight – a British company based in Stoke on Trent – with a solution.

The company make an aid called Bath-Knight, a powered mobility aid with a belt that can gently lower and raise you into the bath – and can easily fit over all types of bath and even be mounted on a free-standing frame – useful for Grade II listed buildings.

So we had a visit from a salesman – David Murphy – who assured us it was easy to fit and would be no problems. ” we had no trouble fitting over roll top baths and we even have customers from stately homes who are very happy with it.” he said.

As a blurb says: “If you have trouble getting in and out of the bath, then a Bath-Knight bath lift can help put an end to all your worries about bathing.”

But it was not to be. The first sign of a problem came when they came to install it. The installer,Chris,had to abandon it because he had not noticed he had to move the waste pipe from the bath when he drew up the specifications. As he had cancelled the plumber he had to make a new appointment. And that is when the real trouble began.

Both Chris and Martin, the Polish plumber, came to fit the installation and moved the bath to reroute the waste pipe which did not take too much time.
The next day I had a bath. When I came back two hours later water was pouring into cellar, dripping from the ceiling into the hall, and running down the wall to our main staircase.
I called Bath Knight and they sent the Polish plumber back the next day. It turned out to be an all day job with no water. What the installer had done was fracture the copper piping to the bath and they had to replace the piping.
That should have been the end of it. But when my wife used the Bath Knight and found the angle on the belt was too steep. She felt unsafe and worried she would slip off particularly when trying to get out of the bath.
I contacted Bath Knight and their initial response was tardy – Chris the installer insisted it was correct – but it wasn’t and the customer care manager, David Reiter,stopped him coming to see us.
I sent a letter to the chairman,Mrs Annette Greenwood, threatening her with a pretty critical blog about their product.
Mr Reiter did a U-turn and came down from Stoke on Trent to Berkhamsted, to see us. He not only found that the angle was a little on the high side but that the frame which holds the robust aid moved when it shouldn’t.
To the company’s credit things got better. Martin, the Polish plumber, who was the most helpful of the lot, came and redecorated our hall. A new frame arrived and it is working better.
But there was a further sting in the tail. I wrote and asked for a reduction on this most expensive kit, it costs over £2000. I got no reply, instead just bill reminders from the accounts department, ending up with a threat of legal action. I complained to Mr Reiter and finally got £250 off the bill.
What should have been an extremely simple process became a nightmare. I have published this to warn people that the elderly may find the product a little unnerving because of the slope.
But also I wonder that if I were not a savvy journo whether we would have had a different outcome. Care-Knight charge a lot for their product – which I must admit is robust. Most of their clients are elderly and vulnerable and may literally not be able to stand up for themselves if faced with such an equivalent mess. I would warn people to be wary – and also ask how they got your address, Care Knight do pay for such information.

6 thoughts on “Bath Knightmare: A cautionary tale for disabled people”