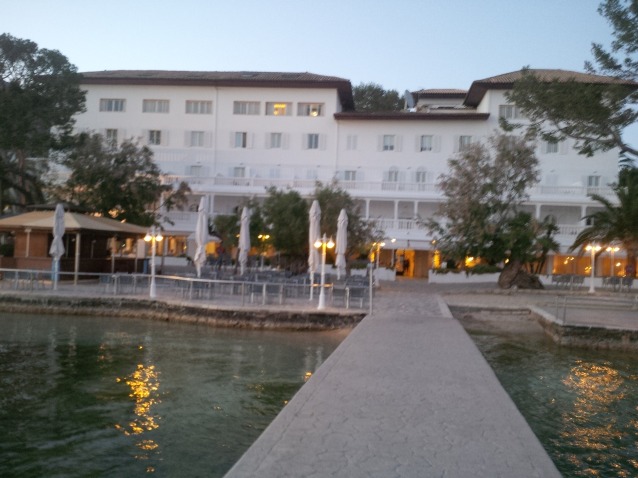 Hotel Illa D’Or, Puerto Pollensa Majorca. from the jetty.Picture by me

Almost a year after Margaret had her devastating stroke on the Isles of Scilly we took  courage in both hands and took our first holiday.

We returned to a particular tranquil spot in the Majorcan resort of Puerto Pollensa on the North West coast.And to a particular hotel , the Hotel Illa D’Or, on the outskirts of the town overlooking the bay.

Now the centre of Puerto Pollensa – though at my age thankfully no Magaluf- is bustling and busy with a yacht harbour. Where we were is much quieter but the brilliant thing is you can walk ( or cycle ) all the way from the centre to the hotel on a traffic free promenade with outstanding sea and mountain views.

The luxury hotel itself is still owned by the same family since  it opened 85 years ago in 1929 and one of its first guests was the Catalan surrealist artist Joan Miro who spent his honeymoon here. I am not surprised. The hotel itself is now much bigger than in 1929 but it has not lost its personal touch while providing all the facilities you might need from swimming pools to tennis courts and a superb terrace overlooking the sea. The food supervised by an Argentinian chef is  superb and creative without being flashy or indigestible  and the choice at the breakfast buffet is stunning – from Serrano ham to a cooked grill and fresh fruit to pastries and even chocolate gateaux.

But this time what we really appreciated was the courtesy and facilities the hotel provided for the disabled. We had an adapted room with a walk in shower and its own terrace accessible by a ramp. it was near the lift and the entrance to the restaurant and the front terrace were level – easily negotiable by a stroller or a wheelchair – and we soon dispensed with the use of a wheelchair. The hotel could not have provided better facilities. 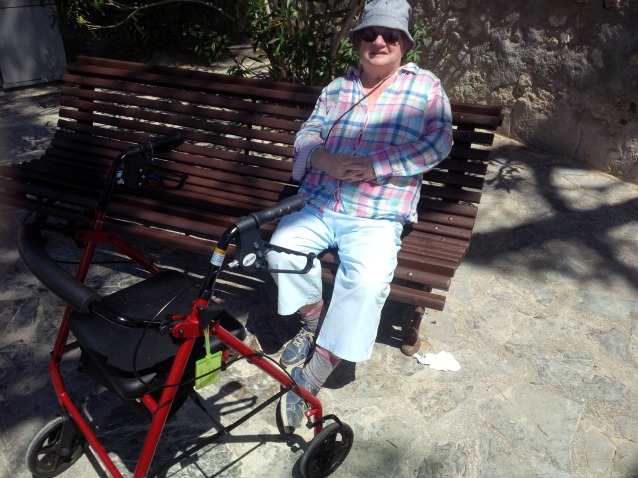 Margaret was able to use a stroller and walk in part unaided along the front – gradually increasing the distance until we achieved our objective of getting to the centre and having lunch!  The ground shaded in part by pine trees can be a bit uneven but as the physios would say it was good rehab.

It was also our first experience of using an assisted flight – and I have to say the outsourced company at Birmingham Airport and the staff at Palma Airport were superb is getting us to and from the plane.

The one blackspot: the flight on Monarch Airlines

The one black spot was Monarch Airlines who did seem to confirm their lowly ratings in Which? magazine by ignoring all our requests via Sovereign Holidays for an aisle seat and to be near the toilets.This led to a dispute with another elderly passenger when Margaret took an aisle seat – as he had booked and paid for it. Only after protests  to a rather badly disabled aware air crew and the fact the flight had some spare empty seats at the rear  was it solved amicably.

But if you want a week away in four star luxury, sun and some the taste of some rather superior Catalan Rioja stocked by the hotel I would recommend it, disabled or not.

6 thoughts on “Majorca’s half hidden gem: the idyllic honeymoon hotel of Joan Miro”