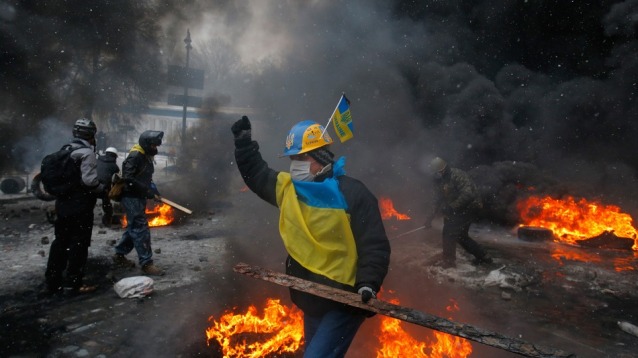 As the crisis in Ukraine deepens David Cameron is taking an increasingly belligerent line against the Russians. He is now sending a token number of troops and promising  greater European Union  economic sanctions unless Vladimir Putin backs down.

This policy may well be right and is likely to be  popular, though people might be wary of armed involvement. As he is reported in the Daily Mail on Friday telling Govan shipyard workers :”In terms of what Britain has done, we were the first country to say that Russia should be thrown out of the G8, and Russia was thrown out of the G8. We have been the strongest adherent that we need strong sanctions in Europe and we’ve pushed for those, achieved those and held on to those at every single occasion.” Now we are the first to send some troops.

Not so well reported has been Britain’s views on the  £2.2 billion support  package agreed by the EU including the UK to help Ukraine. As well as agreeing this large sum of money to help the Ukraine the package included measures to cover one of the most controversial areas of EU policy – the relaxation of immigration controls.

As I report in Tribune this week Britain actually signed up to deal which allowed the abolition of visa requirements for Ukrainians across 26 countries in Europe..

Among the measures the EU agreed is to abolish all visa requirements for Ukrainians seeking to come to the EU for any 90 day period in the Schengen zone. This covers 22 countries in the Eu and four others, Iceland, Norway, Switzerland and Liechtenstein ,Only the UK and Ireland have a permanent opt out.

The agreement said: “Mobility is an important area where the Commission believes meaningful, visible, short-term steps should be taken.

“While a number of them depend on the political decisions of the Member States, the Commission is willing and ready to pro-actively facilitate swift and efficient coordination in this area.

It added : ” The Commission fully recognises the importance of mobility and people-to-people contacts for Ukrainian citizens and will support Ukrainian efforts to move forward the visa liberalisation process as quickly as possible in line with the agreed conditions of the Visa Liberalisation Action Plan.”

For other countries the EU agreement says: A “ Visa Facilitation Agreement is in operation between the EU and Ukraine and the Commission encourages Member States to fully exploit its potential. It gives Member States the possibility of choosing from a series of measures, including waiving visa fees for certain categories of citizens. In addition, the Visa Code gives the Member States additional options to waive the visa fees for further categories, such as, for example, children.”

When questioned the Home Office was adamant that it need not follow any of these guidelines. A spokeswoman said the agreement was equivalent to “a memorandum of understanding” between the EU and other member states outside the Schengen area and the UK need not implement anything.

What is interesting about this is how David Cameron and Theresa May in the pre-election frenzy  have already  implemented a very tough policy on immigration to rival UKIP.

Such a move might well be popular – and there are real concerns – not least by unions like Unite – that fruit farmers were very keen on having Ukrainians over here as a source of cheap labour.

However I think we should know that Cameron’s warm words to help the desperate plight of the Ukrainians do not apply to having a single poor Ukrainian in Britain. The clampdown has begun and the troops, a token 75, are going in.

2 thoughts on “Cameron: Bash the Russians, send in the troops but keep out the Ukrainians”