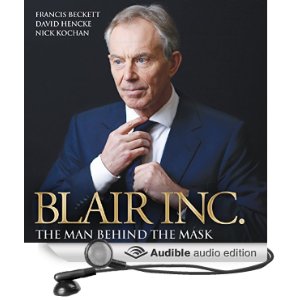 Today is the eve of the publication of a new book by me, Francis Beckett and Nick Kochan which pulls together the life of Tony and Cherie Blair since they left Downing Street in 2007. It is the first account of what happened since Tony Blair ceased to be PM.

In one sense it is a surreal moment. It is the second book Francis and I have written on Tony Blair – the first originally titled The Blairs and their Court dealt with his time in office- and we have never interviewed him or Cherie as he did not want to see us. And most of  the Blairs’ close friends are equally nervous of telling us anything.

Never has a man who still wants to dominate the world stage and charges – we are told – £500,000 for making a speech – been so determined to hide away from public gaze and go to such lengths to hide his income, his  business dealings and his philanthropic and religious work. Both he and Cherie even wanted to keep secret where their business premises were located in London.

What this book puts together is  a picture of man and a woman   who are as  his once close friend Peter Mandelson famously said is ” intensely relaxed with the filthy rich…”.

It tries to analyse his labyrinthine company structure that both generates his wealth and hides who pays him. It looks at his property empire – which allows him to replicate his life as PM with a  Georgian town house in the heart of London  and a historic house in the country.

It traces his less than effective role as a Middle East envoy and looks at his business deals with dictators across Central Europe, Africa and the Middle East. It examines the roles of the Tony Blair Faith Foundation and his role in African governance and looks at how Cherie – once a  proud feminist and human rights lawyer – is now much more keen on business dealings and setting up a property empire with their eldest son, Euan.

Altogether people – particularly Labour voters – may not find this a particularly attractive story. Apologists for him say he was the most successful PM in modern times and we will have omitted the great work he has done in improving the governance of African nations and his religious role through the Faith Foundation.

The extraordinary fact about Blair is how he has become loathed not only by the Labour left – over Iraq and calling for military intervention in Iran- but by the wider public and the Right for what they see as his hypocrisy as a Labour politician interested almost entirely in amassing wealth and not particularly bothered who was bankrolling him.

We have had three ex PMs who did not need to go into retirement homes. The other two – John Major and Gordon Brown – tread different paths and have escaped criticism. John Major simply did go into business to make money but does not spend his time lecturing the rest of us on political issues. Gordon Brown took another route and is devoting his life to charitable work – education in Africa – and not making millions.to have a luxury lifestyle.

Blair seemed to want everything ,wealth, rich friends, money, influence – and ended up a toxic brand. But if you go to enormous lengths  to cover your tracks people have every right to be suspicious of your motives.

You can get our book directly from John Blake Publishing or from all good bookshops. It is also being published in Australia – more details to follow. You can also see extracts of the book on Mail On Line, articles in the Independent, the Guardian  and a riveting lobbying story about what Tony Blair wrote to Hillary Clinton on Exaro news website.

5 thoughts on “Blair Inc: What Tony and Cherie did after Downing Street”