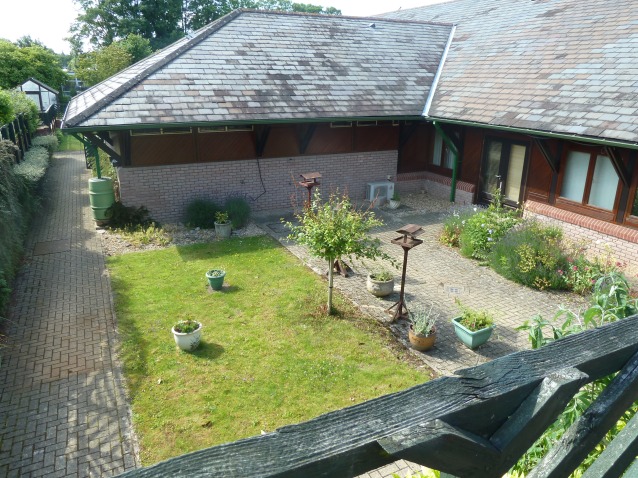 When my wife Margaret was struck down by a stroke on holiday and  lost her mobility one of the  redeeming features was that after her initial care in Truro she was transferred at our GP’s insistence to Gossoms End Community Hospital in our home town, Berkhamsted.

As a result of her stay there and later at the now closed  Holywell rehab unit at St Albans Hospital she has progressed in two years from help to get out of bed and living in a wheelchair through to the first stage of slow independent walking without any aids.

That is in no small part to the loving care at Gossoms End which led me to write a blog two years ago praising the work there.

At the time I said :

“What is particularly good is that some one has properly planned this facility so that stroke victims and people recovering from serious injuries can get proper physiotherapy and nursing care in a decent environment. The hospital unlike Watford, the main accident and emergency hospital for West Herts, is under no pressure to throw people out at the earliest opportunity. The cost of running it is much less than using a ward in acute hospital.

But the real key is that this is a nurse and physiotherapy led unit – with a weekly visit from a consultant and a doctor on call. The result is that the driving force  behind the care is to find the most suitable  rehab treatment for the individual patient.”

Alas that is no more. The unit closed  today because the Herts Community Health Trust  which runs it has overspent on agency staff because they can’t get full-time staff. It has faced criticism over staffing levels at other hospitals. Staff have been transferred elsewhere.

If you read the latest board minutes you see a trust that is struggling to provide services across Hertfordshire It is short of staff in key areas, facing an emergency financial crisis and failing in its ambition to become an independent foundation trust. Indeed it can only achieve the latter as far as I can see by slashing services so it can become profitable. Most of the key issues at the board meeting have a red or amber tag – meaning they are facing a disaster unless they slash costs in four weeks by closing down every possible service.

This local example to my mind illustrates the lie by our national politicians particularly by Jeremy Hunt, the health  secretary – about the state of the NHS. They trip out figures boasting about how much extra money there is. They haven’t a clue about integrated planning. They don’t know  and  don’t care how one policy – high house prices in Hertfordshire probably contributes to difficulties in recruiting staff -impacts on another. They are incapable of joining anything up – silo politicians.

In the meantime they talk about  so-called government policy ” care in the community” or ” no care in the community” as I prefer to call it. This is just an excuse to close down facilities and dump the sick ,ill, disabled and the insane on their families knowing that taxpayers don’t have to pay out. And if they haven’t any family, well, they will probably fall over and die and that will be a saving on the pensions bill.

To my mind closure of such facilities is short sighted. It means they only half rehabilitate people, failing to draw out their full potential and not wishing to acknowledge that new medical research shows that stroke victims  continue to improve for a much longer period than people thought. We are lucky that we can still afford to pay for Margaret to have private physiotherapy. I notice the lack in improvements among those who can’t.

I realise we have been lucky but I fear for anybody who has the misfortune to have a stroke in Hertfordshire today. Don’t expect the board members of Hertfordshire Community Health trust to do much about it.

12 thoughts on “Closed today: The rehab hospital that should be at the cutting edge of NHS care”