This week the inquiry into historic child sexual abuse under New Zealand judge Lady Justice Goddard will start preliminary hearings which could last years. On Wednesday it starts with a hearing into allegations against the late Lord Janner. The following Wednesday there are two short sessions looking into abuse inside the Anglican Church and at Knowl View and other venues in Rochdale and on Thursday March 24  into child sexual abuse of people in the care of Lambeth Council. The details are here.

Last week a report came out from the United Kingdom  Child Sex Abuse People’s Tribunal- a very small scale investigation that took evidence from 24 people covering different types of sexual abuse with families, institutions and paedophile rings. What comes out – apart from horrific stories from the testimony of individuals – is a system not capable of sensitively handling the issue. As it says in this paragraph: 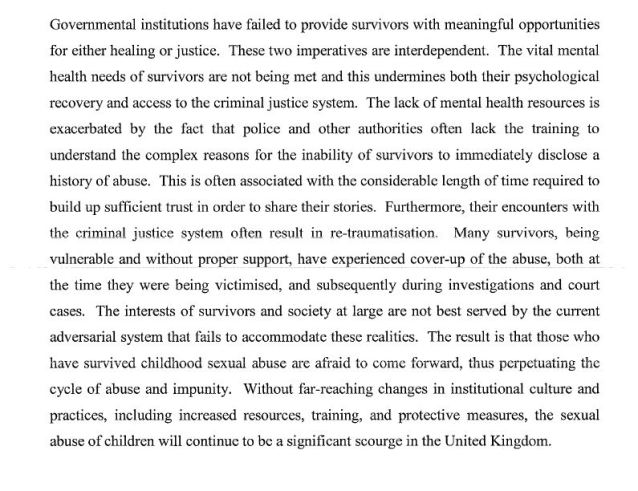 That to my mind  is as important as the recommendations reported on Mail On line by  the Press Association here . These include a permanent commission,provision of advocates to survivors  proper links between mental health and  police investigating abuse  and a safe channel for victims yo give evidence anonymously.plus better training for police, the judiciary and the health service to handle cases.

This report deserves to be taken seriously as its steering committee was composed ,mainly of survivors themselves  aided by professional advisers and two experts, Regina Paulose, an American lawyer and former prosecutor and Alan Collins, a British solicitor with enormous experience in handling child abuse cases from Jersey’s Haut de la Garenne inquiry  to Australia and Kenya.

If the Goddard Inquiry really wants to tackle the issue they could  not do much better than take  this on board  when they start their hearings.

The full report can be found here.