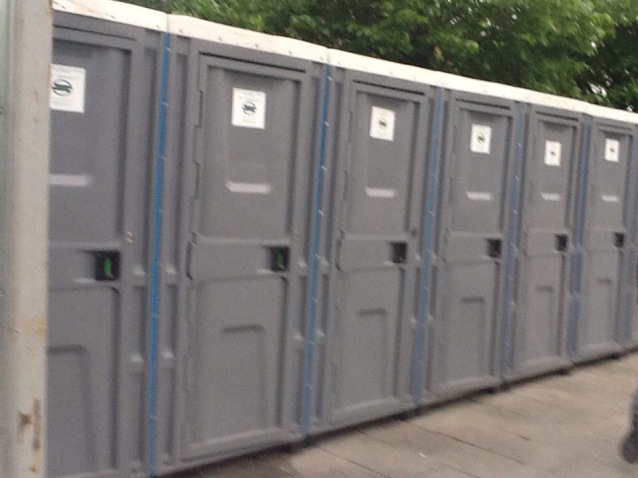 USE McDONALDS LOOS IN EMERGENCY SAY RUSSIAN EMBASSY IN LONDON -THEY WON’T MIND.

Russia under the Communists was well known for its queues. Food was scarce, shoes and clothes pretty unobtainable. All that has gone under Putin. But in a visit this month with my disabled wife,Margaret, we discovered a new Russian queuing phenomena – just to visit the loo.

The reason is that in Russia a public loo is a rare phenomenon even in the most popular venues in Moscow and St Petersburg. And a disabled loo is such a rare creature that it verges on extinction. What mostly passes for a disabled loo would also struggle to meet the British Trades Description Act.

Most Russian loos look like a builders’ portacabin. The row in the picture above are believe it or not the public conveniences off Red Square. In the Kremlin itself there are toilets for just six people – a place visited by millions every year.  And only one disabled person can pee at a time. Within little more than a stone’s throw of Putin’s apartment strict rules ban flushing toilet paper down loos, a babuska  rations the number of sheets, and comical notice in English warns the disabled not to stand on the toilet seat.In most cases the pleasure of such facilities sets you back 25 roubles or 30p.

But what happens when you don’t have the cash as in St Petersburg when both my wife and I had not yet visited a cash machine to get any roubles. My wife pleaded desperation and the babuska let her in only to find the double doors led to a series of steps to get on the throne of the loo. When there was a crash the babuska rushed to see over the door  to see if she was all right.Fortunately she was.

I had a little more difficulty. WIth no money it was Niet. So desperate was I to enter the portacabin that I even offered a crisp five pound note. That was refused . In final desperation I went round the back of the Portabin. It was only when I was poised to piss on the historic wall of  Peter the Great’s fortress that suddenly she started banging on her office window. I was literally relieved in every sense and allowed to enter for free.

But there were other extraodinary toilet events to come. Nothing really surpassed the public convenince  at the Nunnery where the Czars in the past sent their discarded wives rather than choosing the Henry VIII solution. To enter this loo you went into the bowels of the earth down a spiralling staircase. Hardly suitable for the disabled.When my wife eventually go down there it turned into a communal experience women able to see each other  over  stable doors.Still at least the experience was free. See the entrance below.

However  there is one disabled loo in Moscow that shames everyone  So high tech and brilliantlly equipped that it has no rival. It is in Moscow’s magnificent and brilliant Jewish Museum – more in another piece on Russia –  and boasts a bum warmer and a bidet . It is easily  accessible and i t is free for the price of an admission ticket. If only all loos were like this.

Russia needs to get its  act together if it wants to become a big tourist destination. It so needs another revolution, a proper disability agenda and a body to champion the disabled and fight for decent loos.

I took this up with the Russian Embassy when we returned from the trip . This is their unedited reply:

“Thank you for letting us know about your impressions and concerns. Indeed, there are fewer toilets for the disabled in Russia than there should be. Standards for accessible environment were legally set in 2001, and they are complied with in new buildings and structures, but, regretfully, less so in the already existing ones. This is really an issue we should deal with. Note that the safe option in larger towns is McDonalds – they always have good accessible toilets and are OK with non-customers using them.”

9 thoughts on “Russian Reflections:How you can’t spend a rouble in a Russian loo”