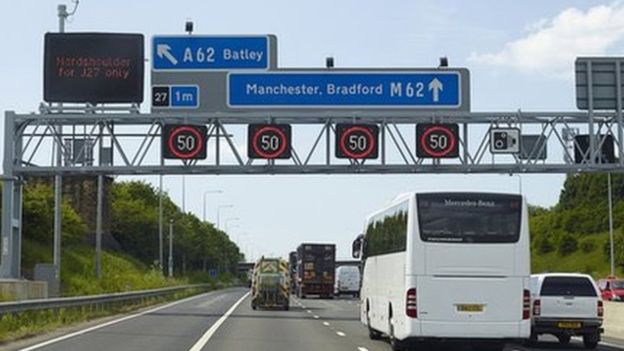 M62 motorway £161m of improvements planned before voters next go to the polls. pic credit: BBC

The government is fiddling its £11.4 billion road  building and improvement programme  so that  new road schemes will be timed to have their maximum impact to gain votes from motorists when they go the polls.

The Department of Transport already fiddled its present plans  by fixing the time for new road schemes to coincide with voters going to the polls in 2015.

Now they are planning to have the largest number of schemes  going ahead in 2019 to 2020  just when people go to the polls for the next general election.

This disclosure does not come from the Labour Party or the Liberal Democrats – who were party to the first part of the plan – but from an impeccably detailed analysis by Whitehall’s spending watchdog, the National Audit Office – with a reputation for independence and political neutrality.

Their investigation into the highways agency programme  for motorways and A roads reveals that ministers cut short the planning period for new road schemes to just 17 months- instead of a normal 30 month period – so it could be timed to come out for the 2015 general election.

And their analysis  of present plans show the busiest period for new schemes to start will be in 2019-20 just as people are preparing to cast their votes. I have written about this in Tribune magazine.

The manipulation of the road scheme plans has however meant the ministry has  had one embarrassing drawback. Ministers over committed the number of schemes that can be built within its present budget and at least 16 may have to be scrapped because they are not value for money.  But this embarrassing decision will be taken soon – mid term – so it should not affect campaigning in the run up to the election. So in fact the promises made by the Tories in 2015 will in part be fake news.

The  NAO report says the rush to produce a plan before the 2015 election “meant that the Department and the Highways Agency could not carry out sufficient analysis and planning to ensure that the Road Investment Strategy was affordable and deliverable, and that the projects would produce high benefits relative to costs.

“In particular, the need to develop so many new projects more or less from scratch meant that the portfolio of enhancement projects contained a high level of uncertainty from the outset.”

The report says: “The Department chose to set a capital programme which was forecast to exceed funding by £652 million.

This ‘over-programming’ had been standard practice in the Highways Agency, as it was expected that some schemes would be delayed or drop out of the portfolio as it was refined. By August 2016, the amount by which forecast capital costs exceeded available funding had increased to £841 million.”

Among the projects that have generated extra money include £234m for Project Stack – to allow lorries to be parked on the M20 while waiting to go abroad – which will be essential if border controls are introduced as a result of Brexit. Another £161m is needed to bring forward two projects on the M62 which the government wants to turn into a smart motorway  for 60 miles between Manchester and Leeds.

Amyas Morse, head of the National Audit Office, said: “The Department and Highways England need to agree a more realistic and affordable plan if they are to provide optimal value from the Road Investment Strategy”.

…Decisive action needs to be taken before the updated delivery plan is published in the summer if shortcomings in the current strategy are not to be carried over into future road investment periods.”

But the truth is the government know motorists’ votes play a part in any election. and they will do their damnest to fix schemes – from a local by pass to improved motorways – to make sure they can be used to maximum electoral advantage.