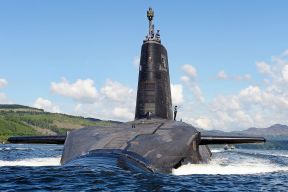 Whether you support or oppose Britain’s very costly renewal of the Trident nuclear deterrent  you  would expect to pay for it through general taxation.

You wouldn’t expect to have to subsidise it by paying even higher prices for essential and already expensive electricity to light and heat your home.

Yet this exactly what is going to happen following a  disclosure this month after a very short exchange between MPs and senior civil servants at a  hearing of the Commons Public Accounts Committee this month. And you won’t be seeing this spelt out in your bills.

The hearing was not into Trident but into the rapidly increasing costs and management of Britain’s first nuclear power station for decades at Hinkley Point.

But the issue was raised from a paper submitted to the committee by the Sussex University Social Science Policy Research Unit from Prof. Andy Stirling, Fellow of the Academy of Social Sciences and Dr Phil Johnstone.

Its key words were: ” an undetermined part of the full costs of this expensive, controversial – but officially highly-prioritised [3] – military infrastructure are in effect (without clear public acknowledgement or justification), being loaded into electricity prices. With costs of alternative large-scale domestic low-carbon energy resources like offshore wind power confirmed as significantly more favourable than HPC [4], it seems a hidden subsidy is being imposed on electricity consumers.”

“If a UK withdrawal from civil nuclear power on grounds of uncompetitive economics were to leave these shared costs borne entirely on the military side, then UK military nuclear infrastructures would be significantly more expensive.

“If civil nuclear commitments are being maintained (despite adverse economics) in order to help cover these shared costs, then it is this that amounts to a cross-subsidy.”

The problem was that these academics could only speculate they have no proof. Until now.

Meg Hillier, the Labour chair of the committee, without referring  to all this detail from Sussex University got an admission. She questioned Stephen Lovegrove, former Permanent Secretary, Department for Energy and Climate Change, on the issue.

This is the exchange:

“ Mr Lovegrove, there has been an argument put forward by Sussex University that Hinkley is a great opportunity to maintain our nuclear skills base. With your hat on at the Ministry of Defence, are you having discussions with the business Department about this?

Mr Lovegrove: “We are, yes. In my last year at DECC, I was in regular discussion with Jon Thompson, former Permanent Secretary at the MOD, to say that as a nation we are going into a fairly intense period of nuclear activity…. We are building the new SSBNs (nuclear armed nuclear submarines) and completing the Astutes.

…We are completing the build of the nuclear submarines which carry conventional weaponry. We have at some point to renew the warheads, so there is very definitely an opportunity here for the nation to grasp in terms of building up its nuclear skills.

“I do not think that that is going to happen by accident; it is going to require concerted Government action to make it happen. We are speaking to colleagues at BEIS ( Business, Energy and Industrial Strategy) fairly repeatedly about it, and have a number of forums in which we are doing that.”

So it is true. The two programmes ARE linked. And with  the cost of nuclear powered electricity at £92.50  per unit compared to £57 from other sources including renewable energy you are going to pay substantially more.

One company that is publicly delighted by this is Rolls Royce.  They are quoted saying : “that “expansion of a nuclear-capable skilled workforce through a civil nuclear UK programme would relieve the Ministry of Defence of the burden of developing and retaining skills and capability. This would free up valuable resources for other investments”.

Well Rolls Royce got £100m out of the submarine order and are happy for you to pay for the nuclear research. So it is more profit for them, higher bills for you.

The original article is published in Tribune magazine this week.