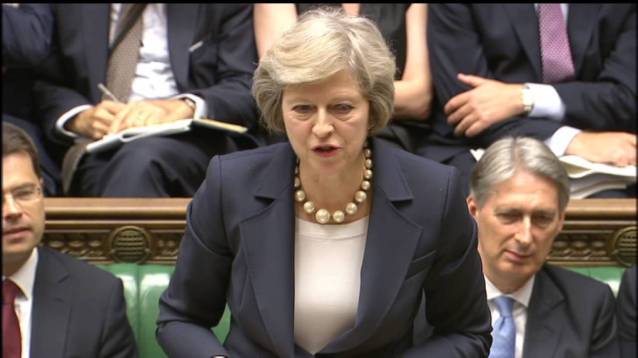 There was an extraordinary error by the Prime Minister, Theresa May, when she was challenged by Ian Blackford, the Scottish Nationalist leader, at Prime Minister’s Questions in Parliament today.

Mr Blackford used one of his two questions to raise the plight of the 3.8 million WASPI women who have been hit by the government’s  decision to raise the pension age from 60 to 65, then 66 and 67.

Mr Blackford asked: “Yesterday we celebrated the achievements of the suffragette movement, which was about democracy, equality and fairness for women.

“However, today in the United Kingdom, 3.8 million women are not receiving the pension to which they are entitled. A motion in this House last November, which received unanimous cross-party support—the vote was 288 to zero—called on the Government in London to do the right thing. Will the Prime Minister do her bit for gender equality and end the injustice faced by 1950s women.”

“As people are living longer, it is important that we equalise the pension age of men and women. We are doing that, and we are doing it faster. We have already acted to give more protection to the women involved. An extra £1 billion has been put in to ensure that nobody will see their pension entitlement changed by more than 18 months. That was a real response to the issue that was being addressed. If the right hon. Gentleman wants to talk about equality, he has to recognise the importance of the equality of the state pension age between men and women.”

What this showed is what 3.8 million women waiting up to SIX years for their delayed pension have yet to get the message across. Theresa May just thinks you have a little wait of 18 months. And this £1.1 billion  concession is just a future cost to the government over the next two years, no money has been paid out yet.

This ignorance – caused by her only taking into account the changes in 2011 affecting the rise in the pension  age from 65 to 66 for both men and women – shows how ignorant the Prime Minister is.  Considering she is in that age group herself – but guaranteed to get a large Parliamentary and Prime Ministerial pension in her right-plus a big payout for her wealthy hubby – shows the gulf between the Metropolitan elite and the ordinary person. Mo misery for her in her old age.

But it was good news that the SNP leadership were taking women pensioners plight seriously. About time Labour and Liberal Democrats did the same.

UPDATE:  Ian Blackford said today (Thurs) : ” The Prime Minister’s reply was outrageous. She was being economical with the truth. We are all know there have been some horrible cases as a result of this policy and something will have to be done.

“I am not just sympathetic I will not let this matter go.”

Later Guy Opperham, under secretary for works and pensions, made a statement in Parliament saying  the government were  not going to do anything and would fight any legal challenge by the 3.8 million people to change its mind. He was cagey about announcing the last date when people who were never told about the change until years afterwards could complain about maladministration.

Watch him and the short debate that followed here.

Guy Opperman has a majority of 9,286 over Labour in his Hexham constituency in Northumberland. There are 6000 constituents who are 50s women and have suffered from a policy he has no intention of changing. If they all switched to his nearest challenger he could lose his seat. That is up to you.