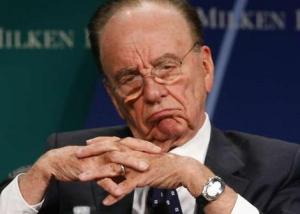 Rupert Murdoch: Did he look that at the end of the Sun meeting

Exaro have today released the final section of the 45 minute audio of Rupert Murdoch’s meeting with arrested Sun journalists. It is a very poignant moment when Deidre  Sanders, the Sun’s agony aunt, reads out a  damning letter from the wife of a senior executive.

You can hear it at http://www.exaronews.com/articles/5035/audio-dear-deidre-rupert-murdoch-betrayed-us-the-sun . The feeling among Sun journalists that they have been betrayed  by a decision of the Management and Standards Committee to hand over mountains of material  to the Met Police and face a life with criminal convictions could not be more emphasised.

The meeting closes with a former Sun executive sobbing as Rupert Murdoch promises to stuff the letter down a lawyer’s throat. It makes awful listening. A tale of betrayal for people who have been loyal to the company for years while the Murdoch employee who sanctioned the release of the information and gave evidence to Leveson has been promoted to ” some fancy job ”  in the United States.

The audio recording serves as a warning to Murdoch staffers world wide, in Australia, the United States as  well as Britain. If he allows people on his beloved Sun to be treated like this, what chance will you have if anything goes  badly wrong  on your paper, radio or TV station in your country.