Issue much more widespread than the public realise

The recent Dispatches programme and article in the Times by journalist Matthew Syed highlighted the plight of whistleblowers in the NHS citing the case of Peter Duffy, a consultant surgeon, working for the Morecambe Bay Foundation Trust. Faced with failures at the trust in the emergencies department he expressed concern for two patients who subsequently died from kidney sepsis.

One would have expected the Trust to have remedied the situation. Instead they turned on him rather than admit any failings. As he told Matthew Syed: ” I was on the receiving end of allegations of bullying, abuse and racism. And so what I hoped would be an attempt to raise standards became an investigation of myself”.

It took five years of toxic attacks and tribunal hearings before he won his case for constructive dismissal. The sad thing is that this is not some isolated instance but appears to be growing in an NHS that is more concerned with its reputation than the safety of patients in its care and is preparing to spend millions of taxpayers money on lawyers fees to undermine any cases brought by whistleblowers. Furthermore it is prepared to spend literally years to wear down anybody who puts their face above the parapet.

Readers of this blog will be aware of the case of Usha Prasad, a popular and competent cardiologist ( the General Medical Council has recently revalidated her) who has been driven out of the Epsom and St Helier University Health Trust ( now merged with St George’s Health Trust),

Today she starts a 16 day employment tribunal hearing as a whistleblower. She is backed by Dr Sola Odimuyiwa, from the hospital trust and two retired eminent cardiologists, Professor Jane Somerville and Dr David Ward, who believe her case is just one example of a malign system designed to cover up failures in the NHS. This week the latter two sent a letter to the Sunday Times which was edited down for publication. This is the full text:

“We thank Matthew Syed (Comment Oct 24) for his frank exposure of some of the “mistakes and weaknesses” of the NHS of which the persecution of medical whistle-blowers, as shown by the heinous story of the consultant surgeon, Mr Peter Duffy. He is one example of many.

It is a doctor’s duty of candour to draw attention to matters which are not safe for patients. This action, in good faith, prevents accidents thereby protecting patients. Hospital Trusts may not respond favourably to such complaints and may use their unbridled powers to instigate prolonged, expensive and vengeful disciplinary processes.

Medicine has learnt some of the lessons from aviation safety but the fair and open treatment of whistle-blowers is not one of them. Hospital Trusts are able to fund these processes because they can access public funds not available to the whistle-blower which is a gross imbalance of power. Shady external “management consultants”, who operate by their own rules, and expensive legal firms are hired by Trusts at great expense with the sole aim of ensuring the dismissal of the troublesome whistle-blower. This certainly affects the recruitment and retention of doctors the NHS so badly needs.

A serious consequence of this nefarious process has been the emergence of a cover-up culture in which the initial deficiencies or ‘protected disclosures’ are inadequately investigated.  There is no oversight or regulation of the way Trusts investigate whistleblowers. What informal processes there are may have been designed deliberately to avoid or deflect scrutiny. We have been unable to find a body or organisation to whom to report a Trust’s bad treatment of a whistle-blower. Attempts by supporters of whistle-blowers to engage higher regulatory bodies such as NHS England are usually met with indifference.

For the victimised, whistle-blowing doctor the outcome can be devastating. Their careers are stolen from them. The reputational damage prevents them from securing another job. Serious physical and mental health problems are not uncommon and family lives are destroyed.

We think the investigation of NHS whistle-blowers, of which there have been many notable cases over the past decade, should open and accountable. It is a scandal unknown by the wider public and in need of an independent inquiry.”

You can see they believe this is a national problem not an isolated case. It can be backed up by a roll call of cases ( some of which are not yet finished). You can click on the stories reported in various newspapers to get an idea of the scale of toxicity on this issue.

But this is not the end of it by many means. Since I took up Dr Prasad’s case I have become aware through a new group. Doctors for Justice, that there are as many as 35, yes 35, other cases. Nearly all the doctors at the moment are requesting confidentiality until their case becomes public at an employment tribunal hearing. There are many, many other doctors who have quietly quit trusts to find work elsewhere because they don’t want to have to fight their employers for years on end.

Under this system it is the patient that pays the price – and in a number of cases the ultimate price – death. That is why this blog is going to keep an eye on what is going on the NHS until someone has the guts to reform the system and take on a bureaucracy that seems more interested in preserving its reputation than improving patient safety.

Please donate to this blog to allow me to continue my forensic reporting of public issues.

Or enter a custom amount 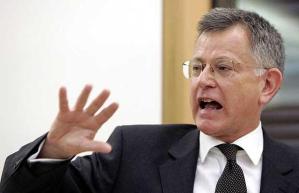 stephen byers- like a cab for hire-pic courtesy daily telegraph

For years it has been an open secret that the lobbying industry has failed spectacularly to regulate itself. Divided between two groups, the Association of Professional Political Consultants and the Public Relations Consultants Association, it is still not agreed to set up a joint body with agreed standards on how to conduct business. Nor do all companies have to belong to either association. Some companies voluntarily register clients, others keep lists secret. Some companies (belonging to the APPC) ban politicians from directorships, but the politicians themselves can and have set up their own lobbying and public relations companies which avoid membership of the APPC. Similarly large legal firms also have lobbying and public relations arms and avoid disclosing the identities of their clients under   spurious “client confidentiality” rules. They also employ ex Cabinet ministers.

The government had a chance to do something about this a year ago by introducing a statutory register for lobbyists. The all party Commons Public Administration Committee called for it in a report. Tom Watson, as a junior Cabinet Office minister, was sympathetic to tougher action to curb excesses, but only now has Harriet Harman, leader of the House, committed the government to do anything about it. Better late than never, but I suspect the Sunday Times and Channel Four Dispatches revelations have had more effect than any serious deliberations by MPs.

If the government had acted earlier neither the TV company nor the Sunday Times could have set up a fake lobbying company to talk to ex ministers, because it would have be registered- and the game would have been up from day one.

Worse this lack of control of lobbying is compounded by the toothless role of the Advisory Committee on Business Appointments which is supposed to vet ex-ministers jobs. Effectively however, this body allows ex ministers to do what they like when they leave office. Yes, they are expected to seek their advice for any appointment within two years of leaving government. And the committee can impose restrictions on jobs they could take up. But ministers can ignore their advice knowing they face no penalty whatsoever and knowing that the committee has no resources to ever check up whether the minister is even following their imposed restrictions – particularly over lobbying.

The fundamental weaknesses on both sides created the perfect storm that allowed the media to expose the latest lobbying scandal over the weekend. Sadly we shouldn’t be too surprised that ex ministers can carry on like this in private in order to make more money in a day than a state pensioner receives in a year. The present system is designed to allow both ministers and lobbyists to get away with it with impunity.