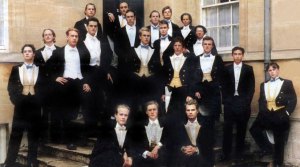 Bullingdon : The earlier generation before Rich Kids of Snapshot

If ever David Cameron’s claim that we are all in it together needed to be proved false, look at a site on Facebook called the Rich Kids of Snapchat.

Set up by a 17 year old British public schoolboy and liked by 244,000 people this site celebrates the life style of the super rich public schoolboys – the new generation expecting to run Britain in a decade or so.

Far from having any concern for the rest of us, this ” fun ” site worships money, fast cars, Gucci, luxury yachts and private jets,champagne and has an unhealthy interest in guns.

It is virtually the calling card of the new ” Bullingdon Club ” and the kids know they are the new ” boss class ” – the future generation of Tory Cabinet ministers, entrepreneurs and flashy businessmen and bankers. And some will have the vote in next year’s election,

Among the fun pictures are kids using £50 notes as toilet paper, £20 notes for tablecloths, handling guns to protect their estates from the ” peasants”, and commuting from home to public school by private helicopters or showing they have a £10m private bank account at Coutts.

Not surprisingly this has produced a reaction across the net with people calling for the site to be taken down, and a spate of hostile comments – sometimes producing ripostes like warning people to shut up as they will be their boss in future life.

More seriously as the Inforrm blog reveals  these antics have posed problems for the more mature seriously rich parents who wish to hide their opulent life styles from the rest of us and pretend “we are all in it together”.

As the Inforrm blog says : ” The consequences could be very serious for those wealthy teens, and their families, where potentially inflammatory images appear which include identifying information such as faces, car registrations and locations.

One 19 year old, who frequently posted about his lavish lifestyle and who was featured on Tumblr site “Rich Kids on Instagram”, has already run into trouble, having had several luxury cars from his father’s rental business subsequently set alight by vandals, causing over £500,000 worth of damage to his father’s business.

Another featured ‘rich kid’ was Alexa Dell, daughter of Dell Inc. CEO Michael Dell, who posted an image of her brother tucking into a feast onboard a private jet, bound for Fiji. She also used her Twitter account to regularly post details of her location, complete with GPS location tagging- somewhat undermining the annual US$2.7 million her father reportedly spends on family security.  Upon discovering this, Alexa’s account was removed and her image has been taken down.”

The blog rightly points out that in an era of unemployment and  poverty where ceo’s have made people redundant  this  can be inflammatory.

It rightly adds:” a teen bragging about the lavish lifestyle of his or her CEO parent who has recently made redundancies or been the recipient of a sizeable bonus can easily catch the eye of a journalist on the hunt for a story – as can any images posted by a naive child who has a parent in the public eye. ”

But to me the whole site seems symptomatic of a yawning divide opening up in the UK and the last thing I would want to see is it taken down. Such antics provide the perfect foil to attack the wealthy Lynton Crosby and the image he wants the Tories to present to the electorate of the ruling class in the next election. Spoilt brats revealing themselves for what they really are!

Meanwhile in true entrepreneurial fashion the site is up for sale by its 17 year old owner. He has been offered $150,000 by an American but might let it go for a mere $40,000 to a Brit with spare cash from his pocket money.