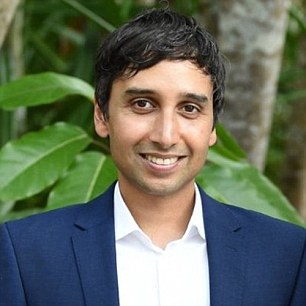 This is Raja Dasgupta. He was a fast stream entrant to the civil service elite. He had a  good career . He started in the private office of  Alan Duncan ,the minster for international development in 2011.

He was promoted to climate change manager in South Africa in 2012 and then became head of the business effectiveness team in 2014 also in South Africa.

His Linked In profile says : “I have played a leading role on strategic business planning for DFID’s regional Africa programme, directly advised and worked with UK International Development ministers, and officially represented the UK during international treaty negotiations at the United Nations.”.

His Linked In profile which detailed his career now appears to have been taken down following  the exposure about his activities.

But in June last year he joined Adam Smith International – a British private overseas aid contractor ( annual income £130m) which relied on 80 per cent of its money from the Department for International Development – as a senior manager based in Nairobi, Kenya.

Now he has proved to be the catalyst that has brought down ASI Ltd – which has been effectively banned from bidding for any more contracts until the organisation has proved to the ministry that it has been completely reformed. Three senior founder directors, Peter Young ( in his youth a far right Tory), Andrew Kuhn and  Amitabh Shrivastava have resigned and the founder executive chairman,William Morrison, is to leave once the reforms are completed.

Three separate sources in England and Africa  (and the Mail on Sunday) have named Raja  Dasgupta as the civil servant who gave confidential ministry  information to ASI Ltd which gave them a competitive edge to bid for contracts across Africa.

One source said : “when moving to ASI in South Africa he took with him DFID country plans and country specific private sector engagement plans that DFID would then rank bids against, it set out specific priorities and specific sectors and markets that DFID wanted to focus on…This then allowed ASI to bid on contracts specific to these Southern Africa private sector engagement plans as set out and created by DFID and FCO.( Foreign and Commonwealth Office).”

Certainly the official findings of a DFID report – which does not name him – confirm this.

“The withdrawal by ASI is the result of serious concerns about the company’s behaviour:

I tried to contact Raja Dasgupta by ringing his Nairobi office. There was no reply nor message facility to leave my name. I tried to contact ASI’s media team and did leave a message about whether Raja was still working for them. They have not come back to me.

Reprehensible as his actions were, this story has wider ramifications. He is not just a rogue  chancer or trader even if DFID seem to pin the blame on him. The culture exposed at Adam Smith International is a damning indictment of the British company. They knew they had access to confidential material which could be used for commercial gain. They wanted to make more profits in a company that already paid six figure salaries  and huge dividends to its top people. They were millionaires dealing in poverty. That is why – even if it is reformed – DFID are right to say there will be no “quick fix” which allows them to resume business next month.

But it also raises questions about DFID and its capacity to monitor what is going on. While the aid budget has gone up – the staff budget has been cut. So fewer people are monitoring larger sums of aid. DFID will not release the  full forensic report into what happened – either to the public or to the Select Committee for International Development, which holds the ministry to account. What have they got to hide.

This story began when the Mail on Sunday exposed the firm trying and failing to hoodwink the Select Committee on International Development by creating favourable reports of their work. It has now morphed into an example of how British private contractors can try and rip off the British taxpayer for private gain by any means they see as necessary.