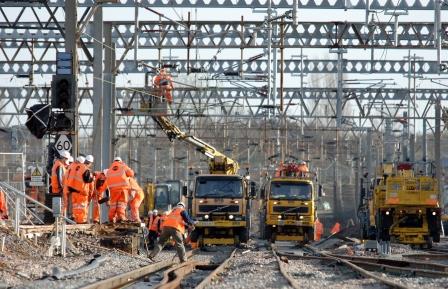 If you want to know what is wrong with the present state of  Britain’s railways look no further than a recent National Audit Office report into the mess that is the Great Western electrification scheme. I have written about this in Tribune

As reported at the time the cost overrun and delay totalled a mouthwatering £1.2 billion on a £2.8 billion scheme and led to the scheme being curtailed with delays to the Cardiff to Swansea electrification for up to five years and  similar delays for the electrification of branch services in the Thames Valley.

But the damage  goes much further than just the Great Western Mainline to Cardiff and Bristol electrification scheme, bad though that is, the National Audit Office reveals. It will affect train capacity hundreds of miles away

The electrification was supposed to be the catalyst for the release of rolling stock across the country improving train capacity and phasing out old stock that has been around for decades.

The NAO reports: Under the original plan:

Thames Valley could then release diesel trains to the west, providing more capacity for passengers on the Bristol, Exeter and Cornish networks

The London to Swansea route could then release the diesel High Speed Trains to address capacity issues on intercity routes in Scotland.

An additional fleet of diesel and electric ( Bi mode trains) capable trains recently ordered by the train company, Great Western Railway,  would be introduced in the south-west, providing more capacity and faster journey times on London to Plymouth and Penzance routes.

Passengers in the west (Bristol, Exeter and Cornwall routes) will now have to wait almost two years later than scheduled to see benefits such as more capacity.

Great Western Railway has also had to make additional orders of new bi-mode  trains to prevent the cancellation of services on busy Oxford to London routes.

The result according to the NAO will mean higher costs as diesel trains cost more to maintain, lower revenue because of lack of capacity and a bill for converting older trains to comply with stricter laws on helping disabled passengers that would not have been necessary if they had been replaced.

And they won’t care if the trains are overcrowded as they can maximise revenue. If ever there was a case for reforming the rail system and ending privatisation this is a perfect example.