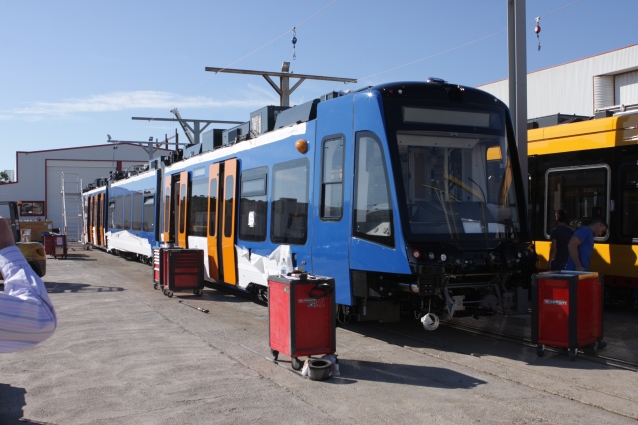 The Rotherham train tram – staying in the depot until next year

This is the new Sheffield to Rotherham tram train. It should have been in service over a year ago. Instead it is going nowhere. It is one of seven train trams  confined to a depot and won’t go into service until next May at the earliest.

As a taxpayer you are paying the private rail and bus company  Stagecoach £2.5m compensation for a service it can’t run because Network Rail haven’t completed the job on time.

But the £2.5m is small beer to another much bigger bill you are paying Network Rail to adapt a route both extending tram tracks and using a disused railway track to create the new service from Sheffield to Rotherham.

That bill is now nearly five times what was originally estimated -it has gone from £18.7 m to £75.1m – a staggering increase on the original projected cost.

Details of this scandal are published in a report by Parliament’s financial watchdog, the National Audit Office and will no doubt be examined by MPs on the Commons public accounts committee later this year. I have written about it in Tribune magazine today.

The project is important because it is a pilot scheme and if it is successful lead to other tram train projects in Glasgow to the airport and in the South Wales valleys outside Cardiff.

The bungling of the project – originally approved by two Liberal Democrat ministers, Norman Baker and Danny Alexander – as  a worthy new public transport scheme has infuriated Sheffield Labour MP Clive Betts who has put the whole blame on bad management by Network Rail.

A Karlsruhe tram train : In operation since the 1980s on streets and mainline railways. Pic credit : random streets blogspot

The scheme which was nearly cancelled twice however should not have been rocket science. Tram trains have existed in Germany – Karlsruhe was the first city to have one – since 1980 yet according to the MP Network Rail couldn’t be bothered to consult them to get advice  before they started.

Another big failing was not to appreciate that the tram trains might require two different electrification systems and a failure to appreciate how much work was needed on the railway lines to bring them back into public service – including the need to alter a junction.

Rob McIntosh, Network Rail’s London North Eastern and East Midlands Route Managing Director, said: “Sheffield to Rotherham tram-train is an ambitious pilot, a UK first, that will bring new travel choices to people of South Yorkshire when services begin in 2018. The project continues to be complex and challenging but will deliver real benefits for thousands of daily commuters.

…”the project has been extended to include additional work to future-proof the tram-train electrification system for later conversion to the national rail standard system that was  not part of the original scope. Such factors have added time and cost to the pilot which is under significant pressure  to deliver.”

However this is still another sorry saga and could impact on future projects. Plans are now going ahead for a £144m tram train link from Glasgow’s Queen Street station to Glasgow Airport using the same technology. Whether this will also overrun remains to be seen.

4 thoughts on “You are paying £2.5m to keep this tram train in a depot”