Migration has always been a controversial issue – even though today’s United Kingdom along with the United States is one of the most diverse countries in the world.

Next Wednesday the Ethical Journalist Network – which aims to improve standards in journalism -is hosting a free top level webinar with outstanding speakers on how the journalists themselves report this issue.

Since most people form their views on migration from newspapers, TV, radio and increasingly from social media, how issues are reported and reflected across the media have never been more important.

If you are interested in the issue or just curious about how the make up of the country is changing post Brexit this webinar is where you can find out what you are being told or what is not being told about today’s migration issues.

It will cover the issue of the arrival of new people to the UK from Hong Kong -probably one of the largest groups of people to come here since the Ugandan Asians were driven out of their country and Afro-Caribbean people were invited to work in Britain from the West Indies.

It will contrast this with the treatment of people who flee across the Channel to the UK- and are now to be housed in substandard conditions and face being exiled to camps abroad under a new Nationality Bill put forward by Priti Patel, the home secretary.

It will also look at the hostile environment that led to the Windrush scandal which could be repeated when European Union people who did not get settled status here are forcibly deported, denied work and health care.

The event will be chaired by Rizwana Hamid, Director of the Centre for Media Monitoring and EJN UK Committee member.

Amelia Gentleman is a multi-award-winning journalist who spent six months working on the Windrush scandal for The Guardian which had led to the illegal deportation of Afro Caribbean people who had settled here for decades. She is the author of The Windrush Betrayal: Exposing the Hostile Environment which details the scandal and the effects it had on people’s lives.

Jamal Osman is a  Somali-born award-winning journalist, broadcaster and filmmaker. He is the Africa Correspondent for Channel Four News and has written articles for The Guardian and reported for Al-Jazeera English. His scoops include interviews with Somali pirates, the al-Qaeda-linked Islamist group, Al-Shabab, and an exposure of the illegal trade in UN food aid.

Marzia Rango is the data innovation and capacity building co-ordinator at the International Organisation for Migration in Berlin and is currently managing a project focusing on migration across the Mediterranean to Central Europe. She will be able to give an overall picture of the scale of migration.

Benedict Rogers is the co-founder and chief executive of Hong Kong Watch and co-founder and deputy chairman of the Conservative Party’s Human Rights Commission. He is a human rights activist and a journalist who has written extensively on the plight of people in Hong Kong where democracy is being suppressed by the Chinese authorities.

Chantal da Silva is a freelance journalist who helped expose the appalling conditions asylum seekers face in Napier Barracks despite attempts by the Home Office to hide what was happening. She works for numerous publications including the Independent, the Bureau of Investigative Journalism, Channel 4 and many other TV channels. She focuses on immigration rights.

You can register here at the EJN website or directly at Eventbrite here.

The Migration Museum – an innovative project to create the first permanent home for a museum in the United Kingdom devoted to a story that probably affects every person in the country – is looking for new trustees.

They will come at a time when the museum – at present in a temporary home in a shopping centre in Lewisham, south London is planning to boost its profile and move centre stage to highlight the issue and all its extraordinary facets.

As the prospectus for new trustees says

” Never before has there been stronger justification for there to be a welcoming and stimulating cultural institution – away from the polarising noise of politics and the media – to explore some of the most pressing issues of the day – migration, race, Brexit and our colonial past among them – in a richly aesthetic atmosphere of calm reflection.”

The projects aim, vision and values are summed up in three paragraphs:

“Our Mission is to deliver a popular, high-profile and accessible cultural institution, to which every person in the country can feel a sense of belonging and that puts Britain’s migration story at centre stage.

“Our Vision is of a society in which we all (for we all have migration stories in our family past, if we dig a little) feel connected and represented in an essentially British shared migration story.

” Our Values are to promote tolerance, understanding, respect and participation, and to engender a real sense of representation, both beyond our organisation and within it. This means that we are strongly committed to promoting diversity and representation within our Board, not only to reflect the lived experience of our
audiences, but also to deliver role models for those who join, or aspire to join us, as trustees, employees, volunteers or collaborators. “

For the last few years the museum has already put on a number of exciting events – from recreating the Jungle camp ( and all the art) made by migrants in Calais to putting on a concert by Aeham Ahmad, the incredibly brave and talented pianist who played his piano on the streets of bombed out Yarmouk in Damascus until he was forced to flee by the Syrian dictator Assad to Germany.

More recently during the pandemic there has been a digital exhibition of migrants contribution to the NHS and a series of digital exhibitions telling the story of emigration from the UK and those who were left behind.

For those who might be interested the deadline for applications is May 3 and the prospectus and all the details are here.

I am one of 120 Distinguished Friends of the Migration Museum and am a strong supporter of the project. I have also written a number of stories on this blog on some of their past exhibitions. Here are a few of them.

Until June 22 there is an extraordinary exhibition of art, sculpture,photographs, documents, multi media  and sound on the Calais jungle migrant camp.. It is at the London Newcastle Arts Project Space in Shoreditch,London. 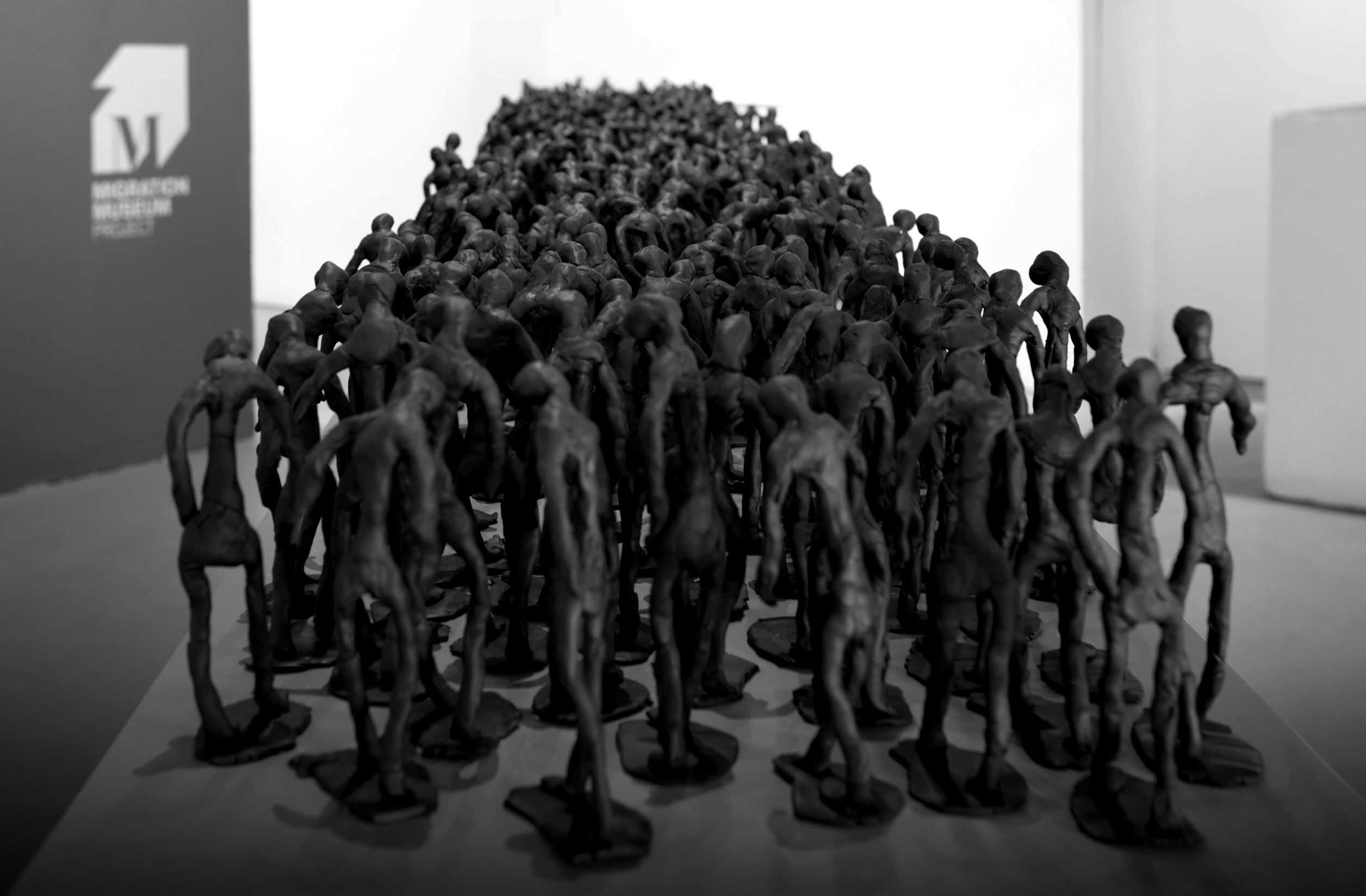 An amazing sculpture at the entrance to the exhibition. It looks like a mass of people but each of them is an individual. A fitting symbol for the exhibition.

The exhibition tells the story of the huge migration from the Middle East, Afghanistan, and North Africa to Calais and the people involved.It is probably the biggest issue in the whole of Europe today.

It is both a harrowing and uplifting showing the strength of the human spirit in the face of extreme adversity. There are evil people, neo Fascists,nasty people smugglers, and thugs who exploit and deride them  but there are also many ,many caring human beings who are prepared to help them on their way to a better, safer life.

What is extraordinary about this exhibition is that much of the art comes from the very people themselves as a way of expressing their own plight. And the squalid Jungle is  a place where people play music, dance, paint,cook,and create as well try to survive.

These are the tents they livedin. Picture

Everyone who has any humanity should see this exhibition – especially the people who denigrate them as hordes or swarms of people. They are people like them. It is antidote to the crass debate on Brexit.

And denying them a safe haven is also denying our country the benefit of their enormous talents – many are highly educated and many have discovered new talents on the way. Worse the plight of unaccompanied children aged from 8 to 14 or 15 is something this country cannot ignore – and thanks to the efforts of Alf Dubs ( Lord Dubs) who pushed Theresa May, the home secretary, to allow them to come in – there is some hope  for a few now. But there needs to be more. 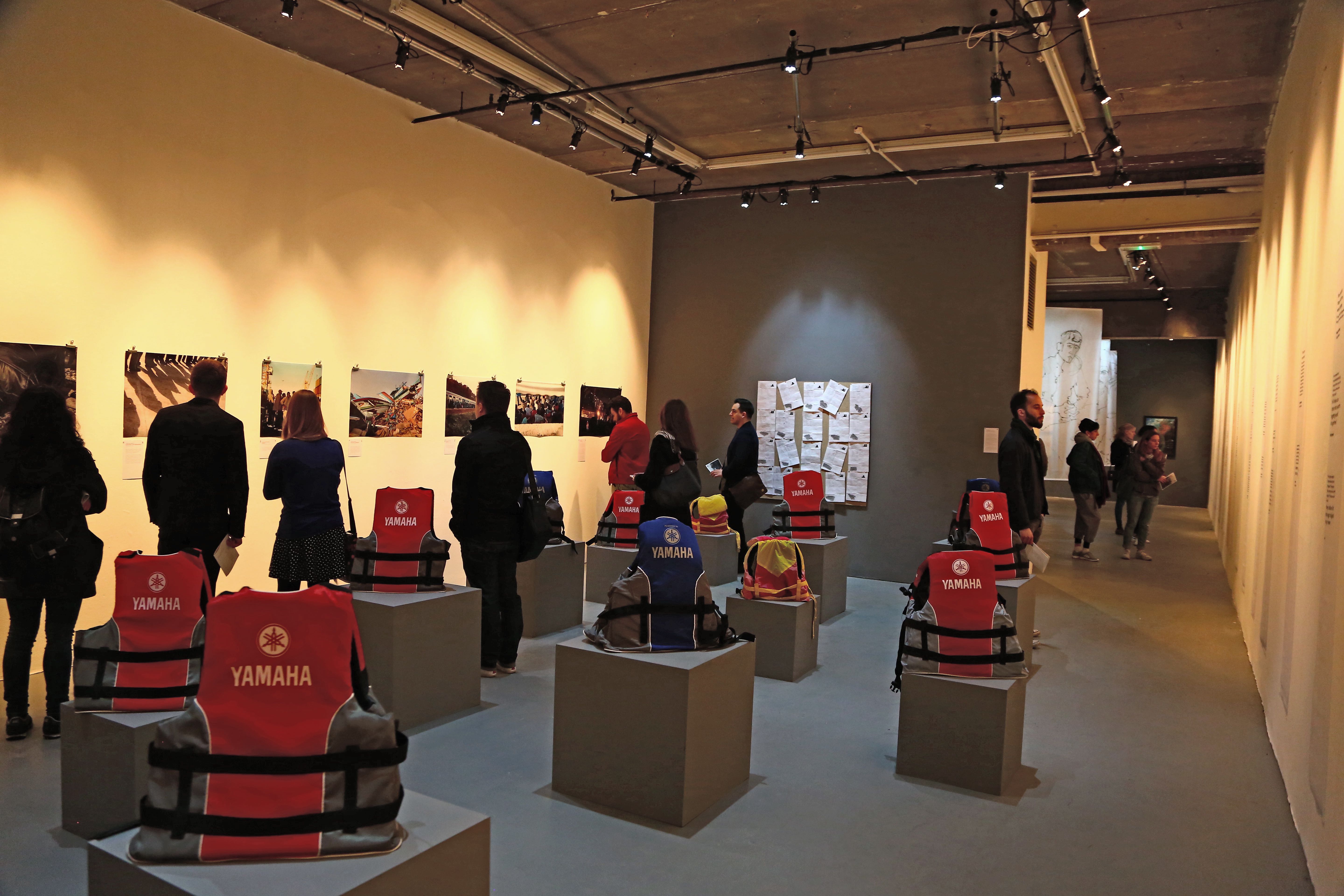 These lifejackets were taken from the beach in Greece. Believe it or not the smugglers gave them fake lifejackets, they don’t float.

At a very moving reception where the organisers- through the Migration Museum Project – was attended by asylum seekers – and some who had managed to be smuggled into Britain. They mingled with students, artists and campaigners looking at the exhibits.

Museums and art centres in Britain you should thinking of staging this exhibition so the people  across the United Kingdom can see the whole story. How about some of you rising to the challenge.

The sculpture as you enter the exhibition. © brandingbygarden.