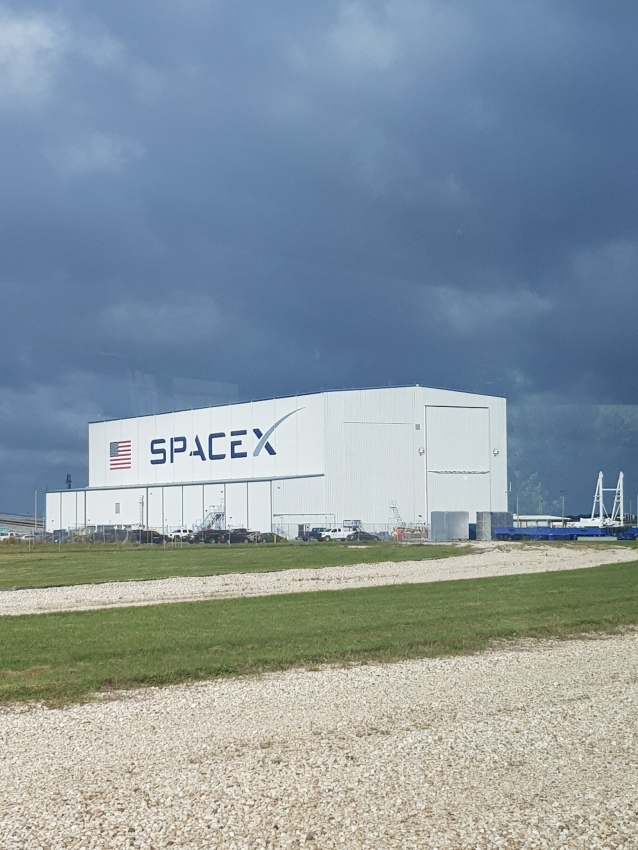 Imagine in 40 years time booking a 14 day holiday on Amazon Prime to hike the craters of the moon. Or a tourist  world voyage to Mars.

﻿Visiting the Kennedy Space Center on a huge nature reserve on North  Merritt Island this year is not  just awesome  but at an extraordinary time in its history.The Florida site is not only where NASA does its top level research as well as showcasing its past achievements  it is now the place where the world’s richest men are competing with each other to launch into space.

If you ever wondered where the huge profits of international capitalist companies are going, most of the money they have made is being spent here. They are gambling on a new lucrative tourist business that will be worth billions in the future. And they are changing the face of Cape Canaveral. Dotted among the state owned space facilities are brand new space centres owned

by private individuals and companies each competing with each other to build rockets , space capsules and launch sites . The only one missing is billionare Richard Branson whose Virgin Galatic company is based elsewhere.

Thus you have Elon Musk, worth $37.7billion, and owner of Tesla electric cars ,with SpaceX, planning with his Falcon rocket to take US astronauts to the space station and then planning to go to the Moon and beyond. He is competing with the world’s richest man Jeff Bezos, worth $125.3 billion and owner of Amazon whose Blue Origen company wants to go to the Moon. And you have Boeing with a base here who want to expand from building aircraft to spacecraft.

And what is also interesting is that the Space centre itself has the Journey to Mars centre where enthusiastic scientists are openly aiming to recruit the next generation to work on their space programme to “solve the impossible ” for the Mars mission.

The talk aimed at today’s ten year olds is premised that if you follow the history of the development of flight within 40 years what could be accomplished by a few pioneers will become commonplace for commercial services for tourists. Hence the interest in the commercialisation of space.

On the  cruise ship one of the most interesting lectures came from a NASA scientist who explained some of the pioneering work being done to aid the space project.Dr Lawrence Kutznetz showed that the breadth of research was spilling over into fields that could help the   disabled , aid medical research,and go the limits of technology.One worldwide research project involves designing a light weight spacesuit from scratch which will be essential if anyone wants to roam around Mars. Unlike the Moon Martian Gravity is similar to Earth’s and no human could walk more the few yards without collapsing under the weight of what they have to carry to stay alive. So using the Internet, peer reviewed research  is designing new materials, sealing the helmet from the rest of the body and allowing the rest of the suit to leak

Another project has very recently discovered by mistake that a particular drug when used on elderly mice caused cells covering its whole body to regenerate turning the equivalent of a 60 year old mouse to having the energy of an adolescent.

Scientists are not quite clear how this happened. The implications of this last experiment I can imagine will be very interesting for our wealthy billionaires funding the space programme – imagine being able to live until you are 150 – double the present lifespan.Or imagine Donald Trump or Rupert Murdoch being offered a double lifespan.Perhaps not.

Other experiments have discovered that if you link two people’s brains using non evasive electrodes it is possible by thought alone to  operate another person’s artificial hand.

So not only is the space centre an exciting place to visit but some of the research going on there is in the realm of science fiction.