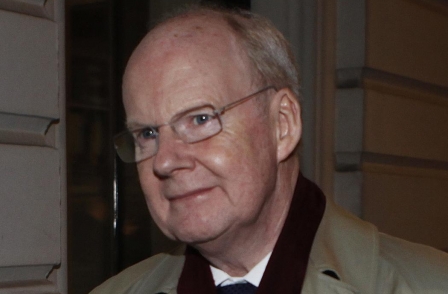 This is Murdoch MacLennan, chief executive of the Telegraph Group, board member of the body that bankrolls the Independent Press Standards Organisation, and friend of Andy Coulson the former jailed editor of the News of the World, and former David Cameron Downing Street press spokesman.

As Roy Greenslade revealed in The Guardian  he has just given a lucrative contract to Andy Coulson to handle  public relations for the Telegraph Group.

Tim Fenton in his Zelo Street blog describes the whole sorry saga of Andy Coulson and how Murdoch MacLennan stood by the beleaguered  former News of the World editor by providing him with a character reference in court before he was sent down.

However his take up of a £200,000 plus job – already met with horror among  some Telegraph journalists – is also in the sense a damning reflection of the body, the Independent Press Standards Organisation.

MacLennan is a director  of the Regulatory Funding Company  which raises levies from the newspaper industry to pay for its work in upholding press standards and handling complaints.

While I am not suggesting – as safeguards are written into the funding arrangements that he would influence any complaint against his newspaper group – it nevertheless reflects badly on IPSO that someone on its funding board does not believe that Andy Coulson did anything wrong.

How are  we to believe that IPSO really stands by such high standards when it turns a blind eye to such a breach of standards. I put this point to IPSO today and their reply dodges the issue.

“IPSO does not comment on appointments made by any of our 86 publishers”, said a spokesman.

But given the flack the rival press standards body, Impress, has faced in the media because it was funded by Max Mosley, that seemed a fair question.

Murdoch MacLennan is part of the media Establishment as Tim Fenton points out. He also is no friend of transparency – given if you check the remarkably uninformative Telegraph Media accounts at Companies House – his salary is hidden from public view. Given he is chief executive he could be the highest paid director – earning £900,000 a year in 2016. That might explain why he thought Andy Coulson’s £200,000 plus a year to do a bit of PR work was relatively small change. Another case of ” mates rates ” I think.

A very good read from Des Freedman.Obviously a very happy Christmas for the Murdoch dynasty, their friends and the Prime Minister. What could possibly go wrong now -only immortality eludes them. Very much a tale of power corrupts. Now they have absolute power they must think nothing is beyond their grasp.

Families should be together at Christmas. That’s the simple message we should take from the merry noises emanating from Rupert Murdoch’s London apartment where, on Monday night, David Cameron, George Osborne, Rebekah Brooks and a slew of top News Corp personnel joined the mogul in capping off what has been a pretty decent year for him.

This is an extremely important revelation by Bellingcat and Byline given that the Met Police have had at last to hand over huge numbers of documents to the Daniel Morgan Independent Panel which is investigating his death. It suggests a wider conspiracy by the Met Police involving more people.
It is also good news that this is one of the first projects that has been ” crowd funded” by Byline showing the need for journalists to be given time and resources to investigate very serious scandals that are in the public interest.

A Bellingcat and Byline investigation can for the first time reveal Scotland Yard had intelligence Mazher Mahmood was corrupting police officers as far back as the summer of 2000.

Dan Evans, the journalist who helped blow the story that there was phone hacking at the News of the World gets his reward. He gets a one year suspended sentence for admitting what others tried to deny.

The former Sunday Mirror and News of the World journalist Dan Evans was, today, sentenced to 10 months’ imprisonment, suspended for one year. Mr Evans had pleaded guilty to two phone hacking offences, misconduct in a public office and perverting the course of justice by lying in a civil claim brought by Kelly Hoppen.

What the judge said about Coulson and the other defendants in full.Andy Coulson got 18 months in jail.

R –v- Coulson and others.

Further problems for Andy Coulson prior to his sentencing as Neville Thurbeck’s mitigation plea says phone hacking was sanctioned by him and Stuart Kuttner, the managing editor, who was acquitted by the jury last week.

Phone hacking at the News of the World was sanctioned by managing editor Stuart Kuttner and three other top executives at Rupert Murdoch’s UK newspaper group, one of its most senior journalists told a court yesterday.

The CPS pushes ahead with a retrial of Coulson and Goodman on bribery of police to obtain copies of internal phone directories. The prosecution also summarised its case against all FIVE News of the World journalists convicted of phone hacking. He described the News of the world as a ” thoroughly criminal enterprise” and said the five hackers should pay £700,000 between them top cover the prosecution’s costs. Another bad day for bad journalism.

Andy Coulson, former award-winning editor of the News of the World, is to face a re-trial over allegations he approved cash bribes to “palace cops” to obtain copies of phone directories for the Royal Family, the Old Bailey heard today.

I am rather surprised in the wake of Coulson’ s conviction for conspiracy over phone hacking none of the commentators have picked up the extraordinary passages about his appointment  to the Tory Party in  Matthew D’Ancona’s revealing book In It Together, The Inside Story of the Coalition Government.

In a series of purple passages he describes the determination of both George Osborne and David Cameron to woo him to become the £275k  Conservative Party’s director of communications on 9 July 2007 – so soon after he resigned from the News of the World as editor over the conviction of Clive Goodman for phone hacking.

It is quite clear from Matthew’s account that Coulson himself had reservations about taking the job – which led him to become the Downing Street press secretary by 2010 at a salary of £140,000 a year – and in hindsight might suggest he was worried about further fall out over the phone hacking scandal.

But what is more extraordinary are the purple passages about Cameron’s passion for his professional abilities.. George Osborne is portrayed as a hard-headed strategist – Matthew describes his view of Coulson as ” a street fighter who could take the battle to Labour and win in a media knife-fight.”

But Cameron comes over as besotted with Coulson. According to Matthew ” Cameron..was awestruck by his communications director, whom he privately described in lyrical language.”

” He treated Coulson as a red top shaman, a source of secret knowledge about the world of tabloids, Essex and kitchen- table politics. The phone hacking story refused to go away but Cameron was determined not to yield to those who urged him to ditch Coulson.”

Matthew later adds – and remember that this written before the trial verdict – that Cameron was determined he must follow him into Downing Street and as a result didn’t want ” to ask too many questions.”

He writes:” Coulson had the talent of the outsider, and exercised a quietly magnetic influence upon his privileged bosses, bringing Billericay to Bullingdon.”

All this makes Cameron’s badly timed apology for appointing him show Cameron up as shallow turncoat. While it may not  quite rank as an equivalent of Peter thrice denying Jesus, it says something about how a man who treats Coulson as a Messiah figure to connect with the working class and then distances himself as fast as he can when he is down and out. Particularly when it is clear from Matthew’s account that Coulson more than once offered to resign because of his Murdoch past.

Coulson has had a bad time – his trial and subsequent conviction – has led to a jury hearing about his  ” love cheat “affair with Rebekah Brooks , his bullying manner from co accused  Royal reporter Clive Goodman, and how he listened to the David Blunkett love tapes before publishing the story.

Don’t get me wrong,  I am not sorry for Coulson or his fate but I do think the Prime Minister is being let off far too lightly. Peter Oborne has already exposed flaws in his apology statement, Matthew D’Ancona,a Tory insider himself, to my mind, exposes flaws in Cameron’s own character.

The trial today came to an untimely end with the judge criticising the Prime Minister for his comments about Coulson before the jury could decide on a verdict on the last charges against the PM’s former press secretary. Now there could be a retrial.

Prosecutors will announce within days whether Andy Coulson will face a re-trial on charges he and former News of the World colleague Clive Goodman paid cash bribes to police officers guarding the Royal Family, the Old Bailey was told today.

How is the mighty press secretary for David Cameron, the love cheat who exposed David Blunkett, fallen! What does this mean for Rupert Murdoch when a right hand man is exposed as a conspiratorial phone hacker! What does it say about Cameron’s judgement when Matthew Ancona’s book reveals that Coulson himself warned Cameron of the problem of the police investigation into the News of the World meant he shouldn’t take the job in the first place.

Andy Coulson, the former tabloid guilty who became the Prime Minister’s director of communications, was today found guilty at the Old Bailey of conspiring to hack phones while running the News of the World.

My Tweets
Join 20,835 other followers